On December 5th 2018, Savannah, in collaboration with French Architect Etienne d’Anglejan, released a completed case study on Resilient Urban Transportation Systems.  The case study assessed two projects in Europe; a built project and a proposed project. A brief overview of the individual projects, resiliency findings, and recommendations are outlined below:

The Amsterdam North-South Line is a 9.8km long route extension. Of this extension,  a total of 6km will be underground. The line extends in and around the greater area of Amsterdam, Netherlands. This new route is 16 minutes long with an interval time of 4 minutes during peak time, 5 minutes during the daytime, and 10 minutes in the evening. The line is located between the suburbs north of the River lj and the Amsterdam Zuid (south) transport interchange. It is commonly referred to as the Noord-Zuidljin Construction Project and was originally designed to provide a more direct journey between the Amsterdam Centraal hub station and South/WTC railway station.

The project began in 2003 as a 1.7 billion Euro project funded by the Municipal Government, however, it ended up costing 3.1 billion euro upon completion on July 22nd, 2018. What’s more interesting, is that the project was originally proposed as early as 1968 when plans for Amsterdam’s first underground were accepted by the city council. This initial project would then go on to be stopped, sidetracked, and restarted many times over the next 40-50 years, finally resulting in completion as the North-South line in July of 2018.

The most notable concern for the project was how the city would be able to build such an underground while also preserving its historic buildings. The Nieuwmarkt Riots in 1975 was the first event that stopped the project in tracks when building demolition threatened the historic neighborhood. This was partially due to the methods used to build the underground at that point in time. In earlier building methods, the historic buildings had to be demolished in order to place large tunnels under the ground where the future train would run.

Later on, this was combatted with the “tunnel” or “drill” method which enabled drilling below ground without destroying what was above the ground. While certainly better than before, this method wasn’t without its problems. The line still incurred cracks in above ground buildings causing both further delays and bankruptcy.

Today, the line has been open for a total of 4 months.  It has allowed many of its passengers quicker commutes and easier transportation. More importantly though, the long insidious process of getting this underground built now stands as an example of how a historic city surrounded by water can still have a modern underground train line.

In assessing the resilience of the Amsterdam North-South line, we grouped the project’s resilience into the 7 main categories: redundancy, resourcefulness, reflectiveness, flexibility, robustness, inclusivity, and integration. To start off, the redundancy of the project allowed for a more efficient multi-modal system to be formed in Amsterdam. This system included the metro, ferries, buses, and bicycles. The city’s resourcefulness was apparent when Amsterdam was brought to a critical point in which it had to develop a new building technique to finally implement an efficient transportation system. It’s reflectiveness is shown in the historical and political process that the metro line went through which included initial system flaws, destruction, and a top down agenda. Additionally, the flexibility of uses for the new line allowed for important sociological factors such as a museum with artifacts.

One can say that the drilling method displays the robustness of the project through the usage of a unique adaption that was used to get a tunnel dug beneath soggy ground that otherwise couldn’t be tampered with. While the inclusivity of this project, is yet to be determined since the line only opened this past July, it could vert week have the potential to affect small business owners and vulnerable populations by connecting them to the inner city.  For the project has already displayed its integration of Amsterdam’s Zuidas and Noord through a quick connection enhancing economic stability for these suburban neighborhoods.

The biggest takeaway from the building of the Amsterdam North-South Line, is that engineering an underground metro 25m deep in the soggy soil of historic Amsterdam is not an easy task. It was the problem-solving mentality combined with the desire to complete the project, that allowed the project to reach its completion. That is not to say that it was the best idea to drill below 25m of soggy soil.  As previously discussed, the project costs escalated to an amount that may actually financially hinder the country and question the project’s economic resiliency. For 3.1 billion Euro is not an economically sound number for a project of this size. However, the line does connect the northernmost part of Amsterdam to the Southern part, the Zuidas business center and even to the airport Schipol. This quick connection to the business center could be the deciding factor in businesses who would normally relocate to a place like London, but now may choose to relocate to Amsterdam instead. Furthermore, the redevelopment of the neighborhood could end up bringing more funding to Amsterdam and the Netherlands in general, thereby offsetting the large project timeline and cost.

The connection of the Amsterdam city center to green space just a touch north of the city also seems to be what makes it all worth the headache the project initially caused. The North-South line aids in Amsterdam’s 1935 masterplan to develop the “city over the city”, thus protecting natural areas and buffer zones. This plan was aimed at creating a denser urban core and successfully integrating natural landscapes within the city.  Protecting the beautiful green areas as buffer zones will also contribute to certain ecological factors for Amsterdam residents, such as better air quality and natural resources. Additionally, Amsterdam’s goals for 2040 outline the idea of a denser city and renewed waterfront. The preservation of the buffer zones by the North-South Line meet this by absorbing excess water and allowing for the city to remain safe during an age of rising seas and frequent storms.

In Copenhagen, Denmark, a completely new metro line called Cityringen, is set to connect the city center via a complete circle.  This line will attach the pre-existing two metro lines that opened in the early 2000s. In particular, this project includes two new stations that will branch off and connect to the new sustainable city district of Nordhavn. This extension will have a 2.5 kilometer track length and will provide an easy change to the S train that will give the new development potential for success. The Danish municipal government and Port Authority is in charge of funding the project for DKK 21.3bn.

In assessing the resiliency of the Cityringen Nordhavn extension, one must first look at the overall plan for Nordhavn. Nordhavn was originally an active industrial port. Therefore, one could easily argue that the transformation of this port into an accessible residential and business quarter represents the idea of positive urban resiliency in its own essence. As an old harbor that was later hit by deindustrialization and soil pollution, Nordhavn will soon have 40,000 new residents, an equal number of new workplaces, 165,000 meters squared of new residential space, 140,000 meters squared of new commercial space, and a 1,100 meter long new quay that will be large enough to host 3 cruise ships.

However, despite the ways in which the Nordhavn adds towards Denmark’s resiliency goals, the development is also creating an environmental stressor to the area  by concentrating more assets in an already at risk coastal area. Many researchers believe that this could expose vulnerability to the Danish coastline. These people argue that developing the harbor may not have been a good idea from the beginning due to incurring erosion of the coastline. Additionally, the neighborhood’s development could get rid of a critical buffer from coastal storms that used to protect the inland city. Finally, the price of depolluting and decontaminating this once industrial area in order to get it ready for safe residential and commercial is quite high. Thus, one might worry that prices to purchase a dwelling in this neighborhood would serve as a reflection of that, thereby excluding certain socioeconomic classes from living there. This would foster a uneven social class for the up and coming neighborhood.

Our recommendations for this project fall into the three main categories of: systems, social, and ecological. Under the systems branch, we believe that emphasis should be put on the redundancy of the Danish transportation system. In other words the question that should be asked here is: Is there an alternative mode to the metro line? To answer this question, a response could be that the development  of the line is necessary because it mitigates the Nordhavn neighborhood’s lack of public bikes and parking for accessibility by motor vehicle.  However, it will be important to take into account how the building of this line’s extension will impact the erosion of the shoreline.

Our social recommendations include: utilizing urban green public space in lieu of excessive roads, a plan to limit parking surrounding the two new metro stations to encourage cycling and walking, and the inclusion of a mandatory statute for inclusionary housing. The latter of which we hope will maximize the use of this neighborhood for all Danish socioeconomic classes.

Finally, the ecological recommendations we have for this project are to look further into the advantages and disadvantages of building onto a natural buffer zone on the coast and at how the addition of cruise ships and tourists to the area will affect the ecological stability of the shoreline. We recommend making a masterplan to mitigate the emissions and erosion that the addition of a train line, cruise ships, residents, and tourists to Nordhavn will cause. 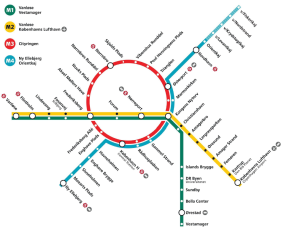 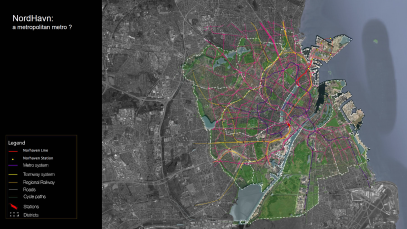 The full case study can be viewed here.