On December 5th, 2017, Savannah released a study where she used Geographical Information Systems (GIS) to determine which San Francisco Neighborhoods were most affected by the Home Mortgage Crisis of 2007 to 2009.  More specifically, she used data from the United States Census Bureau in combination with mapping technologies to see if those who couldn’t afford to pay their home mortgage payments were primarily located in certain areas or spread out evenly in neighborhoods across the city.

When comparing the findings for the highest number of foreclosed units to the highest density of foreclosures per household unit, it was easy to see that the density calculation was a more accurate description of which neighborhoods were most affected by the home mortgage crisis of 2007-2009, since it took into account the overall number of household units in a census tract. For example, while Merced Heights had the most number of foreclosures between 2007 and 2009, its density was not in the top 5 at 0.019488. This is because Merced Heights is a very large neighborhood that consisted of 2,617 household units during the time frame of this study. So, by using density to obtain the answer as to which San Francisco neighborhoods were most affected by the home mortgage crisis of 2007-2009 faired as a much more accurate basis than simply looking up the number of foreclosures per census tract and matching them with neighborhoods.

To learn more or view the whole study click here. 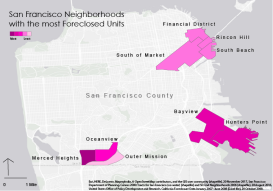